At the time of my birth only my father had the export license to sell merchandize to the tiny island state. A few years before the 1964 disaster, due to floods caused by heavy rains at Dhanushkodi port, my father lost all his merchandise intended for Ceylon (now Sri Lanka)incurring heavy financial losses. Yet he didn’t quite lose his flamboyance at the face of adversities. He wore his warmest smile over his sleeve and landed in Colombo airport…     Read More… 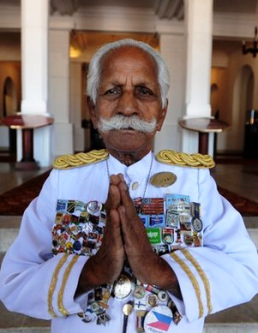 19th November 2014, Wednesday: In the new world order recognition comes to the truly deserving only after death, as underlined by the tale of one more heart-break that emerged, this time from Sri Lanka. The 92-year–old Chattu Kuttan had crossed the narrow strait at Tuticorin to reach the tiny island of Ceylon as a teenage fortune hunter. For 72 years he had worked at Colombo’s Galle Face hotel without ever considering retirement. He has been an institution in the sea side tourist attraction rather than the doorman he actually was and without him Colombo would now be incomplete.

Keralites have all along been fortune hunters.

On July 21, 1969 while announcing Appollo 11’s moon landing, a daily newspaper published from Calicut had also carried a cartoon – that of Neil Armstrong and Buzz Aldrin strolling towards a makeshift outlet with a signboard spread across that read: Malabar Tea Stall. The man inside wore a petite smile under a thick moustache lighting up his entire face. He was attired in a prayer cap covering his closely cropped hair, a half sleeved vest and a checkered lungi held in place by a two-inch-wide green buckled canvas belt.

The laughing lines etched in Indian Ink by the Calicut cartoonist way back in 1969 perhaps remains elusive for those sitting at Eighth Avenue in Manhattan right across the Port Authority Bus Terminal even now.

Whose ‘sense of humor’ is it anyway?

Until half a century ago, Sri Lanka (at that time Ceylon) and Singapore were targeted destinations for fortune hunting young men from Kerala. References of head of families who have been in Ceylon for long, or of those who chose not to return home are commonplace in M.T. Vasudevan Nair’s (the Faulkner of Malayalam) writings.

The Hindu scripture ‘Ramayana’ says that in order to transport his army from the mainland to Ravan’s Lanka (Ceylon) Lord Rama had built a causeway known as ‘Ram Sethu’ (Rama’s bridge). After he won the war and while on his way back Rama with a nudge of one end of his bow broke the bridge he himself had built. Consequently that point of land came to be known as ‘Dhanushkodi’ (end of the bow). On the night of 22-23 December 1964, the ghost town of Dhanushkodi was hit by a 270 km/hr cyclone raising the tidal waves to 20 ft height. 1,800 lives were lost. The Pamban-Dhanushkodi passenger train No. 653 carrying 110 passengers and 5 railway staff was submerged underwater, none survived.

At the time of my birth, in Central Travancore, only my father had the export license to sell merchandize to the tiny island state. A few years before the 1964 disaster, due to floods caused by heavy rains at Dhanushkodi port, my father lost all his merchandise intended for Ceylon incurring heavy financial losses. Yet he didn’t quite lose his flamboyance at the face of adversities. He wore his warmest smile over his sleeve and landed in Colombo airport eventually winning over his business associate who willingly shared the brunt of my father’s losses. My mom told us that he came home with more goodies than he could carry. I have vague memories of the 5 Kg Horlicks bottles, the gold rimmed colourful timepiece that was adorned at the center with an ever blooming flower and the gold ring with my father’s name written over its green enamel head.

A number of years later my father’s business associate paid a reciprocal visit along with his wife and two daughters. Ours was a small town and there were no decent hotels or lodgings to accommodate them, so they had to limit their preferences and be contended with sharing whatever facilities we could offer them within the confinements of our own house for two days. On the third day morning as they were leaving, uncle Abdul Ghani held me close and placed a crisp one hundred rupee note in my hand; the first ever hundred rupee note I ever laid my hands upon!