The boatman’s son from the little known fishing village of Rameswaram invariably went on to symbolize the best of India, the India with its composite mosaic of ethnicities, faiths and languages that synthesize themselves to form one unique identity……     Read More…

IT WAS was sometime during the mid-2000s. The ballroom in the Taj Mahal Palace hotel in Mumbai was packed to its capacity with renowned cardiologists, most of who had travelled across the globe to participate in the international medical conference on ‘non-invasive cardiac management’. President Dr. Avul Pakir Jainulabdeen Abdul Kalam was to inaugurate the proceedings.

Abruptly it was announced that the President had a fall and broke his arm. However, the President did not wish to pull out from his commitment entirely, and would address the audience from the Presidential Mansion through video conferencing. For most people in the audience, doctors as well as journalists, it was a huge disappointment. Meanwhile, two large television screens were set up on either side of the podium. At the designated hour Dr. Kalam promptly walked into camera focus. With one hand in a sling, he appeared perfectly composed; with the other he waved to the audience. He then apologized to the gathering for not being able to join them in person as he too had wanted to. He said life is what happens to you while you are busy making other plans. Before the audience could realize what exactly had he meant by that statement, pointing toward someone sitting in the journalists’ bloc he said, “Sir you don’t have to take notes, the transcript of my speech will be uploaded in the President’s web site in an hour from now.” What followed actually baffled many in the audience, especially those who had come to participate in the conference from abroad. Dr. Kalam spoke with the assistance of presentation slides on how nanotechnology could be used in the management of heart ailments!

The specialists of the heart in the audience were in for more surprises when Dr. Kalam told them about his endeavors in applying defence technologies in the cure of heart ailments. It was way back in 1994 that in collaboration with the Hyderabad- based eminent cardiologist, Dr. Soma Raju, he developed the low-cost coronary stent that later was patented as the ‘Kalam-Raju’ stent‘. The locally developed stent made of surgical grade stainless steel cost only a fraction of the imported ones that also proved its affordability to the average citizens of the country. The chain of hospitals under Dr. Raju’s Care Foundation successfully implanted the Kalam-Raju stents in 511 heart patients within a span of three years. After the Q&A session a consultant cardiologist from Europe remarked, “If only we too had presidents like you Sir in our native lands rather than mere politicians”, only to be dismissed by a light-hearted smile from Dr. Kalam.

[In the years that followed after the commissioning of the K-R stent, Dr. Kalam was obsessed with the idea of developing a light weight caliper for polio-affected children. To begin with he joined hands with Dr. B.N. Prasad (then Head of orthopedic at the Nizam’s Institute of Medical Sciences in Hyderabad) and later with Dr. L. Narendranath (who was Dr. Prasad’s successor at the NIMS) and in 1998 his dream was realized. The caliper made of glass-filled polypropylene used in the construction of missiles weighed hardly 400 grams, only one-tenth of the one that was in use at that time.]

Yet, skeptics argue that he was not the finest engineer the country has ever produced, nor was he the most erudite in the history of the occupants of its highest office. He never obtained an academic Ph.D., though thirty universities had conferred their honorary doctorates on him.

It was during his term as Project Director that the Indian Space Research Organization (ISRO) put ‘Rohini’ into space and got the initial PSLV design right. However, they are still struggling when it comes to Geosynchronous Satellite Launch Vehicle (GSLV). As a consequence the Mars mission had to be powered by the less potent PSLV. Because the PSLV lacked the power to plot a straight forward path to the Mars, a complicated work around had to be engineered for dealing with Earth’s gravity. The fact that Indian space scientists are still not distensible with the use of cryogenic engines will remain as a handicap in the country’s space aspirations.

While the development of the missile deterrents (Prithvi, Agni, Akash) and the ‘Light Combat Aircraft’ (though yet to be inducted into the IAF) have been remarkable, other key defence projects like the ‘main battle tank’ and ‘gun radars’ are years behind schedule. Though the delays cannot be attributed solely to Dr. Kalam, he has been at the helm of the Defence Research and Development Organization (DRDO) long enough not only to be able to push these projects forward, but sadly though floundered to deliver.

Some scientific circles also point out that Pokhran-II was only a “semi-success”. It may be worth mentioning that none of the countries in possession of the H-bomb were able to roll out the contrivance in their initial attempts. Several DRDO scientists who were accessories to Pokhran-II and Pokhran-I, citing seismic statistics and energy outputs say that the H-bomb demonstration was not successful. Most people associated with Dr. Kalam admire his leadership qualities and his ability to dodge bureaucratic snags. But his competency as an aeronautical engineer has been doubted by many. Not surprisingly, both IISc Bangalore, and IIT Madras did not want to admit him into the ranks of their teaching faculty.

Dr. Kalam’s nomination as President was nothing short of a master stroke by the NDA. Being the first BJP-led government they considered it a great asset to find room for a Muslim national hero in the nation’s highest office. Despite his naïveté with the political gamut, Dr. Kalam adapted without losing time to his new responsibilities. During the year-long standoff with Pakistan at the verge of war, and the times following the Gujarat riots, Dr. Kalam’s mellowed permeation proved to be nothing short of allaying for the NDA.

Years later, in an interview with Karan Thapar, former Prime Minister Manmohan Singh conceded that without Dr. Kalam there would have been no nuclear deal with the United States. In the 2008 monsoon session of parliament, Leftist Communist party politbureau secretary Prakash Karat announced their block’s withdrawal of support to the UPA. The Congress soon approached Mulayam Singh Yadav who boasted of a large Muslim vote bank under his wings. But it was Dr. Kalam’s incitement to Yadav that actually swung the votes in UPA’s favor. Hardly a year ago when Dr. Kalam had agreed to continue in office for another term on condition of unanimity, the Congress party showed no qualms in vetoing the call. For a political game player this would have been the perfect opportunity to get even with the Congress and show his requital to the NDA who had rewarded him with the Bharat Ratna and the presidency. But then Dr. Kalam outgrew himself from such petty political witch hunt that earned him more than reverence from either side of the ideological spectrum at a time of intense political polarization. The boatman’s son from the little known fishing village of Rameswaram invariably went on to symbolize the best of India, the India with its composite mosaic of ethnicities, faiths and languages that synthesize themselves to form one unique identity.

With his long hair parted unfashionably in the center and combed down to the sides reaching over his ears, Dr. Kalam was an unlikely pop culture idol. Yet he adapted himself to much of the protocols demanded by the highest office he had come to occupy, without ever compromising on his hair style. The news of having nominated for the MTV Youth Icon of the Year in 2003 and 2006 must have surprised him, given that his idea of music had little in common with MTV’s. 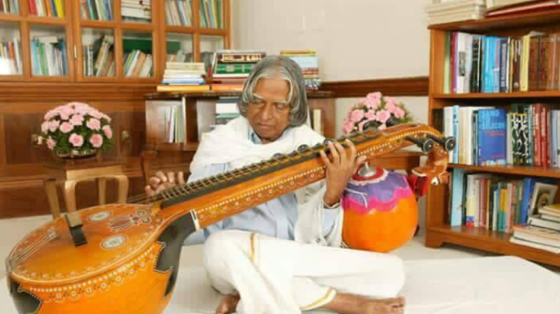 After the ‘Battle of Badr’ (the first open encounter between the Muslims and their Meccan oppressors) a large number of adversaries were taken prisoners by the Muslims. The detainees were required to pay a ransom to the captors for their freedom. Some of them were unable to raise enough funds to bargain for their redemption. Prophet Muhammad (PBUH) knew that most of the captives were literate and offered freedom to those who taught every ten Muslims who were illiterate to read and write. In doing what he was engaged in his final moments at the IIM in Shillong, Dr. Kalam was exactly replicating that moment from a thousand and four hundred years ago, because he believed that knowledge always gave one the leverage over one’s adversaries and life was an endless pursuit of its attainment. As a matter of fact the tag that Dr. Kalam showed preference in being identified with was not that of the former President of the nation, nor the ‘missile man’, but of the ‘Teacher’ who would always impart knowledge to the next generation. He talked and walked that maxim.