Those living in glass houses should not be pelting stones at other people’s homes after all.    Read More… 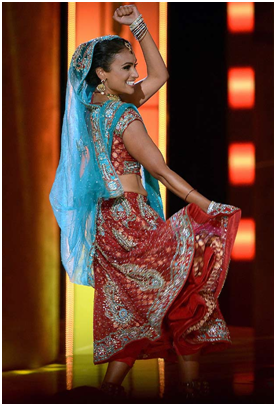 September 19, 2013, Thursday:  Exactly a week before Nina Davuluri danced her way in unadulterated Bollywood fashion into the hearts of the Miss America pageant judges eventually winning the coveted tiara, on 9/11 anniversary Prime Minister Vladimir Putin had made a contribution to the New York Times Op Ed column. The PM highlighted that “it was extremely dangerous to encourage people to see themselves as exceptional, whatever the motivation”. As a matter of fact he was responding to President Obama’s contention that “United States’ policy is what makes America different. It is what makes America exceptional” in his televised address to the nation on possible air strikes over Syria.Indeed it is true that America already had its fair share of achievers of Indian heritage in governors, CEO’s, scientists, academics and artists. Yet Davuluri’s triumph created a stir among an audience who generally turn a blind eye to such accomplishments. The knickers in a twist were turned more into a tourniquet by the racist Tweets from a right wing minority while at the same time the challenges posed by the underlying disparities in skin tone the country was still to overcome were acknowledged by some other quarters. “It reflects the racial anxiety some people have in this country when someone who looks different achieves a level of success that for some reason is seen as being reserved for a certain type of ‘Americans’”, said Deepa Iyer, executive director of a South Asian American advocacy group to Associated Press in an interview.

Not surprisingly, the nasty Tweets prompted comments from the Indian media like, ‘They are a racist lot’, and ‘Martin Luther King Jr’s ideals 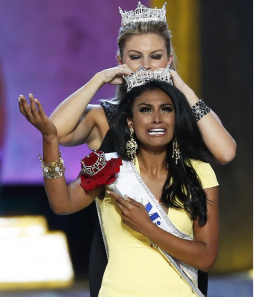 still remain a distant dream in that country’. The very next day of the pageant a viral fad did the rounds in Facebook showing the same photograph of the Telugu American damsel appearing in a global web site and also in an Indian publication; only the latter had digitally manipulated the young lady’s picture giving her a fairer skin tone!.

I really would like to consider the following scenarios had the pageant been staged in India:Would a Nina Davuluri appearing much similar to the image of the dark skinned model showing up in the ‘before-use’part of the Fair & Lovely ad stand a chance to win the tiara? Had her parents originally been from  Uttar Pradesh and had she won the Miss Maharashtra pageant, how many socio-political hurricanes would it have kicked up? In celebration of her victory do we dare to invite Nina Davuluri for a whirl wind tour of the land of her forefathers where a sizeable number of the male inhabitants consider it alright, if given a chance, to stare at, touch, grope, and harass other women.

Admittedly, we love to wear our pride not in our sleeves but watch on the silver screens when the Kumars, Kapoors and Khans ride the crest of waves of the hundred-crore-clubs and Madame Chopras under the guise of gender equality throw their modesty to the winds by wantonly luring the young movie going population into the living-in urbane savoir-faire.

dark complexion in her voice-over ‘Growing up Dark’ says: “I want a place that reminds us that even as dark-skinned people we are a diverse people of many stories, many experiences and many shades of dark brown. We embody more than the hurt we experience from being told we’re inferior. My greatest hope is that this place has the ability to cause positive ripples and shifts towards self-love for all people of all shades.” History will vouch for the fact that it was the oppressed who were the early bird confederates of all crusades. By the US Government’s own admission white Americans will be reduced to a minority population in their own country in less than half a century.

Ironically though it’s high time to measure ourselves and realize that we have been basking in the past glory of a bygone era which is now nonexistent and the time for introspection has arrived. Those living in glass houses should not be pelting stones at other people’s homes after all.